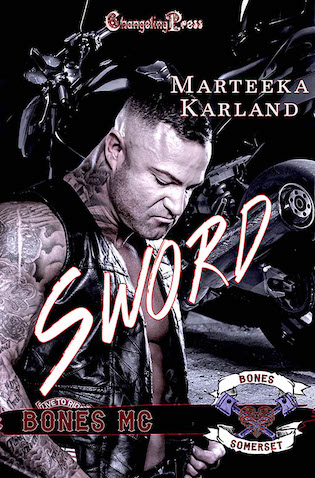 Magenta: The day my mom took up with Black Reign was the worst day of my life. She became ol’ lady for their president. I became another whore for the club to push around. I fought them at every turn because death was preferable to living this life. Beaten, downtrodden, I was about to be given to yet another man. The scariest man I’d ever seen. He was intent on having me on his own turf, and I wasn’t sure I would survive.

Sword: The second I saw the slight young thing being beaten by that ogre of a man, something inside me I’d thought leashed broke free. A demon better left in check reared his head, and I knew she would be mine no matter what. I got her, but she came with bigger problems than I was prepared to deal with. Not that it mattered. I’m Bones MC. We don’t give up, and we protect our own. Even against The Devil himself…

***WARNING!*** Bones MC has no pussies. These men are rough around the edges and fight as hard as they love. You can expect violence — some that may have triggers — and smoking hot sex. If either is something you object to, you should pass. Otherwise, expect an HEA and a man who always satisfies his woman.

She was in Sword’s arms. In a ridiculously small bed. Fully clothed in his shirt and sweatpants. At some point, she’d sprawled out on top of him, her hair tangling them together like silk bindings. One of his big hands rubbed soothingly up and down her back in comfort. That hand seemed to span the entire width of her back as he moved it over her skin lazily.

Magenta remembered him sliding into the bed with her, wrapping her up in his arms as they’d talked. Their conversation spun through her mind like a carousel. Did she believe everything he’d told her? She wanted to. Though she knew better, Magenta decided she’d believe him until he misplaced her trust. Didn’t mean she’d do it blindly though. Maybe she should lay it all out for him.

“You’re fine, girl,” he murmured sleepily. “We got an hour before we need to get up.”

“You know, if you’re trying to make me give up information on Black Reign, I’m more than happy to do it without you making me empty promises. Just promise you won’t make me go back, and I’ll tell you everything I know. That’s the only promise I want or need.”

He sighed, as if disappointed. “I just want another hour,” he grumbled. “Fine. Magenta, I promise I won’t make you go back. Think I said that earlier. Now, go back to sleep. You can spill it all later.”

“You’re kind of a grumpy bear when you wake up, aren’t you?”

Again, he grunted, but tightened his arms around her.

“What are you going to do? You left a man in the clubhouse so you can’t just blaze.”

With an exasperated grunt, Sword rolled them both, maneuvering so that he lay sprawled on top of her, his arms still wrapped around her. He nuzzled her neck, his lips grazing her skin in a soft caress. “Hush now. I need this last hour.” He didn’t stop moving his mouth over her neck.

“Stop,” she whispered, even as she lifted her chin and tilted her head to give him better access. What was wrong with her? Was she going to let him take advantage of her? God, her body had suddenly come alive! Shivers coursed through her, and she realized that, for the first time in her life, she was welcoming a man’s touch.

“I will if you want,” Sword said, even as he licked her flesh with one swipe of his flattened tongue. “Seems like you don’t know what you want. You didn’t push me away. Instead, if I’m not mistaken, your little nails are diggin’ into my back like you’re trying to hold me to you.” He sounded drowsy. Sexy. Like he was her lover waking her for morning sex.

“It’s OK,” he said between nips and scrapes of his teeth. “I’m not gonna take too big a bite out of you. At least not here or now.” He let his lips wander from her neck to her collarbone and back, never venturing into forbidden territory but arousing her like she’d never been before. “When we go to confront Black Reign, you’re staying here with Trucker.”

“You’ll need every man you have,” she breathed out, scarcely able to form a coherent thought beyond the fact that she wanted to cradle his head and push him to her aching breasts. “Crow will annihilate you if you don’t. In fact, call in help. He’s trying to lull you into a false sense of security before he springs whatever trap he has ready.”

“I promise you, the four men we’re takin’ into that clubhouse will be better equipped to deal with that entire club than Crow will be to deal with the four of us. But, you’re right. We called in reinforcements last night. There will be some friends of ours coming to help. Should be here in a little over an hour.” He shifted his weight off her just a little, just enough for her not to feel trapped. Then he laid his head on her chest and kissed the swell of her breast. “So I’d like to get my…” he raised his head to look back over his shoulder at the clock on the wall next to them, “fifty-four minutes.”

“Yeah. So would me and Viper.”

“If you guys need to get a room, you should have said something instead of staying out all fuckin’ night ridin’.”

“You two shut the fuck up. I’m determined to get my ‘fifty-four minutes’.”

“Fifty-three now, bro. Shut up your own damned self.”

Magenta didn’t know what to think or say. Lying with Sword like this was too intimate for strangers, but, strangely, not uncomfortable. All kinds of things went through her mind. Like if the others expected him to have sex with her right there. Did he expect that? If she gave in and embraced the sensations he kindled, would he humiliate her like Black Reign did? And what about Trucker? If everyone thought she’d given in to Sword, would they expect her to service them as well?

“Just relax,” Sword whispered. “No one is gonna hurt you.”

“You keep saying that.”

“Does me hearing it make it any truer than if you never said it?”

Romance author by night, emergency room tech/clerk by day, Marteeka Karland works really hard to drive everyone in her life completely and totally nuts. She has been creating stories from her warped imagination since she was in the third grade. Her love of writing blossomed throughout her teenage years until it developed into the totally unorthodox and irreverent style her English teachers tried so hard to rid her of. Now, she breathes life into faeries, space hunters, werewolves, vampires, shapeshifters, and a few just plane ole ordinary people. She loves to see the awkward, self-conscious band geek get the captain of the football team and make him beg for it.