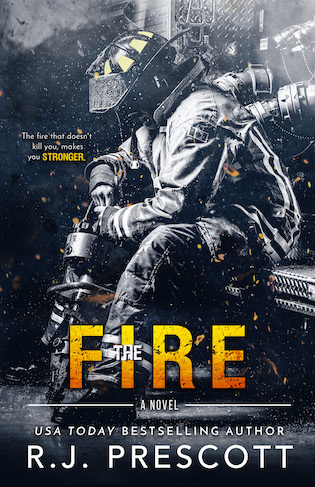 FROM GOODREADS DEBUT FINALIST AND USA TODAY BESTSELLING AUTHOR OF THE HURRICANE COMES THE FIRE.Evelyn Danaher lives a quiet, uneventful life. That is until she meets Tommy. The only man who makes her lose control of her temper and her knickers at the same time.Tattooed Irish firefighter Tommy Riordon found the woman of his dreams, then crashed and burned when a misunderstanding left him on his knees, clutching his balls.They are wrong for each other in every way. But the very best love stores are the ones that shouldn’t work. After all, the fire that doesn’t kill you, makes you stronger.Contemporary Romance. Contains sexual situations, violence, offensive language and mature topics. Recommended for age 18 years and up.

“Does someone want to tell me what you lot are doing, sitting around like a bunch of old ladies, and for the love of God, who let that feckin dog piss all over my feckin floor?” Danny barked, making us jump.

“Shit,” Kier muttered as he looked at Driscoll. The pathetic mutt was sat next to a puddle of piss, his head tilted towards Kieran and looking like butter wouldn’t melt in his mouth.

“Sorry Danny, we were just chatting,” I said, knowing instantly that I should’ve kept my trap shut.

“Well how nice. If I’d known that, I’d have brought some cake and a pot of tea with me. As it is, I’ll just have to remind you this is a professional feckin’ boxing gym. If you want to sit around and chat, piss off down the tea rooms,” Danny said.

“Fuck me backwards,” Con muttered. “I’m going to be training until midnight if you two don’t shut your fuckin’ holes.”

We all turned to look at Danny. His arms were crossed and a cigarette hung from his lips as he gave us his famous death stare. We were all squirming and cracking under the pressure when he finally spoke.

“Kieran, clean up my floor and then I want five miles out of the lot of you.” This time he didn’t he raise his voice, and that was even scarier than when he shouted.

“I’ll take Driscoll with us,” Kier offered. No matter what Kier did he couldn’t train the fucker, yet Danny only had to give the dog a single command and he jumped straight to it. I could relate.

“Don’t be feckin stupid. It’s freezin’ out there. Driscoll. Office,” he ordered. The spoilt mutt licked Kier’s hand, then sashayed his canine arse all the way to Danny’s office where, no doubt, he’d lay out in front of the nice warm radiator.

“Well, what are ya waiting for. Move!” Danny barked, and we jumped to it.

“Jesus, Mary and Joseph. That mongrel of yours gets better treatment than we do,” I moaned, as we made our way to the changing room.

“You make a good point Tommy. Why don’t you go back and tell Danny how you really feel?” Kieran suggested, sarcastically.

“Don’t you have dog piss to clean?” I replied, grinning when he gave me the finger. “Besides, I might not be the sharpest tool in the box, but even I ain’t that .”

USA Today bestselling author R.J. Prescott was born in Cardiff, South Wales, and studied law at the University of Bristol, England. Four weeks before graduation she fell in love, and stayed. Ten years later, she convinced her crazy, wonderful firefighter husband to move back to Cardiff where they now live with their two equally crazy sons. Her debut novel The Hurricane was an international bestseller and finalist in the Goodreads Awards in the category of debut author.