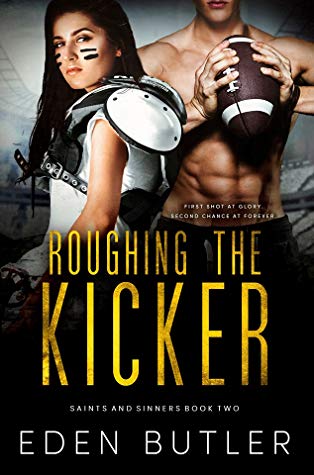 Reese Noble chased this dream for a decade.

Now it was here.

All eyes on the league’s new kicker.

Millions of people expecting her to fail.

But Reese wasn’t a novelty and the spot she landed on the New Orleans Steamers was one she planned to keep.

With her teammates giving her hell and the world doubting her every move, Reese will have to fight harder than anyone else to make her dream a reality.

Even if that means following the lead of Quarterback Ryder Glenn —the only man who brought her to the edge of ecstasy and the depths of heartbreak. The same man who broke her heart ten years before.

In this city, there is a thin line between sin and sainthood and only the strongest can walk it.

The Sinners and Saints series is a spin off from the Thin Love series and in the same universe.

Only 99 cents for a limited time!

She was also a little hurt.

Ryder had stood next to her during most of the game, passing along details about Carolina’s defense, things he thought she should know when she got her shot at a field goal. Their quick exchange about being friends had stood, something that surprised Reese, but Ryder had seemed a little uncomfortable around her. He wouldn’t stand too close, would lean away from her when she asked him a question or two.

Maybe he was distracted by the game. Maybe some part of him still regretted the kiss in the gym. Whatever his reason, Ryder had only looked her way when she came off the field after her last kick, not checking to see if she was okay or getting the rundown on what the blocker had said to her. He hadn’t even joined in with the rest of the team after the game to celebrate their win.

It was Ryder and his weird behavior that distracted Reese as she sat behind the piano, staring down at the keys. She was debating another song, maybe something a little faster than Morrison’s melancholy ballad, when the bench she was sitting on slid against the floor and Ryder dropped down next to her, his back against the keys. Several notes crashed together as he leaned back, and Reese caught the distinct smell of hard liquor coming off him like gasoline from a pump.

“Captain,” she replied moving over to give him room. He watched her shift her position, gaze on her legs when she pulled her skirt down, but otherwise Ryder didn’t speak. The silence went on for so long that Reese tried ignoring it, resting her fingers against the keys as a distraction. “Any requests?”

“Talking about anyone in particular?” She banged out the first chords of Pearl Jam’s “Come Back” and ignored the low snorting laugh he released. Her back straight, Reese leaned over the keys, playing the chord lower. “I did hear that your girlfriend was at the game. She still around?”

Reese stopped playing, taking her fingers from the keys to turn toward Ryder. “You trying to imply something?”

“Big guy like that saving the day? Lot of women would be flattered.”

Reese tightened the muscles at her jaws, trying hard to control her mounting temper. “I wonder if you’d say that to Wilkens or any other kicker that was new to your team. You know…if they had a dick.”

“Careful, Noble. We’re just having a friendly chat about your potential plans with one of our teammates.”

She ignored him, returning her focus to the keyboard beneath her fingers, not caring that Ryder watched her, that he leaned closer as she played. He smelled of bourbon—and nothing like the good stuff Reese had brought for her new teammates that first night at Decadence.

“You were good,” he said, and Reese’s playing slowed, but she didn’t ask him to explain the compliment. After a few more chords, she didn’t have to ask him a thing. “The kicks were golden, and you handled the bullshit like a pro.”

“Careful, Glenn, you might be paying me a compliment on accident.”

“Accidently on purpose,” he said, leaning forward with his elbows on his knees, not looking her. “I always thought Coach should have let you and Witherspoon run that fake back in school.”

Reese frowned, surprised that Ryder remembered the play. She and Witherspoon, the punter, had devised something sneaky that would have landed Duke an easy score because no one would expect Reese to do more than kick the ball. The first time they’d practiced it, Ryder had clapped, laughing like a fool at how quickly the play worked. Her father, on the other hand, hadn’t been impressed.

“Papa thought it was cheap.” Next to her she felt the bench move as Ryder looked up at her, still resting against his knees. She didn’t like his cool quietness or how the man kept staring at her like he expected something remarkable to happen. “He didn’t like fakes.”

“Yeah,” Ryder said, sitting up. He leaned so close to Reese now that she couldn’t play anything. “Like how you fake me out all the time?”

She jerked her attention to him, that dimming temper beginning to rise again. “The hell is that supposed to mean, cabrón?”

Ryder tilted his head, his breath hot, bourbon-soaked when he whispered against her mouth. “Kiss me and walk away. Tempt me and ignore everything between us.”

Reese leaned back, needing space. “You said there was no everything between us anymore. Remember that?”

“Maybe,” he continued, moving a hand to her face, pressing his palm against her cheek. “Maybe I changed my mind. Maybe I don’t like seeing you without me. Maybe I’m drunk and being an asshole.”

“Maybe,” she said, insides lit with something that liquefied her patience. “You should stop being such a selfish prick and remember that you left me. I owe you nothing, Ryder.” She pulled his hand from her face and stood up, grabbing her bag before she glared down at him. “Not one damn thing.”

There was relief as she walked away, that no one was there to witness one of America’s favorite quarterbacks acting like an ass. Reese knew Ryder was a good guy. Other than how things had ended with them, Ryder had always been a decent person who’d never intentionally hurt anyone.

He was just drunk, she told herself, hearing the click of her own heels as she walked toward the elevator. Drunk and stupid, for some reason, about shit that died a long time ago.

Her temper now a blistering inferno, Reese weighed the wisdom of turning back to find Ryder and scream at him. She didn’t care if he was drunk. She didn’t care if had trouble dealing with her being on his team and the memories of all the sins they’d committed together in the past.

“Grown ass man supposed to be…”

“Supposed to be what?” he said, coming up behind her just as the bell for the elevator chimed.

“Leave me alone,” she told him, intending to walk away, but Ryder took her arm, moving her against him and shuffling them both into the empty elevator.

He rested them against the wall, the dim light overhead flickering as the elevator moved. Reese didn’t know what to think of Ryder like this. She didn’t appreciate him blaming her for things that weren’t her fault. She didn’t like the jealous ex-boyfriend attitude from him because it made him look petty.

But God did it feel good to see him making a move right toward her. It was good to feel wanted—desired—after such a long time of nothing special at all.

“You’re confused,” she told him, making a vain attempt to push him back. Ryder didn’t budge, and if she was honest with herself, she was glad he didn’t. He smelled like cheap bourbon and expensive cologne. Both scents worked some kind of seduction on her senses that had her heart hammering and a wicked, sweet tingle thrilling between her legs. “You never dealt with…everything, and now I’m here, a daily reminder. That’s all this is.” He moved closer, hand against her face again, thumb under her bottom lip as he watched her.

Ryder was tempting, even if he was blitzed out of his head. He never lost control. He never let his composure slip, and just then, while he moved closer, right hand slipping to Reese’s thigh, fingertips against the bare skin he brushed along the back of her leg, Reese understood that this was him doing exactly what he wanted.

“This isn’t real…” she tried, going quiet when he curled his fingers higher up her leg and pressed her right against his hard dick.

“That feel real enough for you?” It did. It felt like perfection. It felt real and ready and everything Reese had been missing for the past ten years. When she didn’t speak, was able only to make stupid, small noises of protests she didn’t mean to leave her mouth, Ryder took advantage and angled her head up, putting her waiting mouth close enough for him to take. “Thought so,” he said, closing the small space between them to kiss her.

Eden Butler is a writer of contemporary, fantasy and romantic suspense novels and the nine-times great-granddaughter of an honest-to-God English pirate. This could explain her affinity for rule breaking and rum.

When she’s not writing or wondering about her possibly Jack Sparrowesque ancestor, Eden patiently waits for her Hogwarts letter, reads, and spends too much time in her garden perfecting her green thumb while waiting for the next New Orleans Saints Superbowl win.

She is currently living under teenage rule alongside her husband in southeast Louisiana.