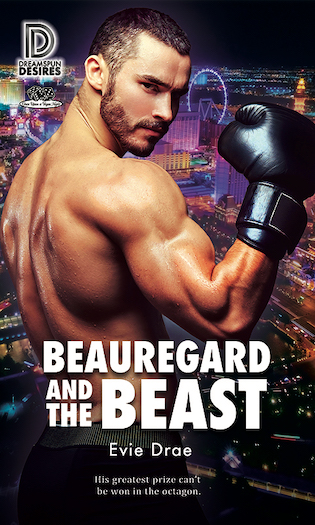 His greatest prize can’t be won in the octagon.

Champion MMA fighter Adam Littrell needs no distractions as he prepares for the fight that will determine whether he retires. But when he opens the door of his swanky Las Vegas home to his new personal assistant, Bo Wilkins, staying focused becomes a struggle.

Aware of Adam’s surly reputation, Bo doesn’t expect to like his new employer, let alone fall for him. But Bo is pleasantly surprised when a shared love of books leads them to study for their GEDs together and plan for a life after their current careers. Adam won’t be able to fight forever, and Bo wants a relationship on equal footing.

But just as their relationship is getting off the ground, the sister Bo raised needs his help, and he drops everything. With Adam’s final match looming and Bo in a different city, reuniting will be the real challenge.

Adam scrubbed both hands over his face and stifled a groan. He glanced at Bo, who sat on the floor opposite him at the stone coffee table, frowning at the workbooks spread before him. His pencil tapped in an irritated rhythm against the pages.

Everything about Bo’s concentration and drive to succeed during this grueling cram session drove Adam to the brink of insanity. Not out of jealousy, even though his own abilities paled in comparison to Bo’s, but because his passion, resilience, and dedication were so goddamn sexy.

Over the past month, Bo had blossomed under the stress that weighed Adam down. His excitement was palpable. It lit up the room and lifted Adam’s spirits unlike anything else. Anytime he wanted to give up, one look at Bo would ease his frustrations and remind him why he’d committed to this in the first place.

Because it meant the world to Bo.

“You feeling as fried as I am?”

Bo’s frown deepened into a scowl. He dropped his pencil and met Adam’s stare. “Who cares how much Jack spent on his new car? And why does it matter that it was $2,400 less than five times the $5,000 selling price of his old one? What benefit does the ability to figure this out provide for my future?”

Chuckling, Adam tucked his thumb under the cover of his book and flipped it closed. Getting his GED might be a dream come true for Bo, but that didn’t mean he was immune to the stress. He just handled it better than Adam because it came with a prize at the end. One that meant much more to Bo.

“I’m sure they’d say all this ‘knowledge’ adds to our critical thinking skills or some shit like that.”

“I don’t think my critical thinking skills have any more room to grow. I’m at capacity.” Bo moaned and let his forehead drop to the table. “I’m too old to learn high school math. My brain doesn’t work that way anymore.”

The mutual teasing about the gap in their age hadn’t let up with time. In fact, as they grew more comfortable together, the razzing only increased. There was no doubt Bo’s remark had been meant as a proverbial jab to his elderly ribs.

Adam stretched his leg under the table and gave Bo’s bent knee a shove with his foot. “Watch it with the ‘too old’ comments, pipsqueak. How do you think I feel? At least you’ve been helping Lulu with her homework all these years. Keeping your exposure level up. The last time I gave any of this shit a second thought, you were still in diapers.”

“I was not.” Bo’s head whipped up and his eyes flashed with mock indignation. “Are you trying to say I was still wetting my pants at six years old?”

A bark of laughter rose up Adam’s throat. “Your addition’s a little off there, Einstein. By your calculations, I was taking freshman math at nineteen.”

“Nuh-uh. You would’ve been fourteen or fifteen. Which means I would’ve been….” Bo tapped his pencil against the thick black upper frame of his browline glasses. His head tilted as his clearly overmathed brain struggled to work out the simple equation.

“If I was fifteen, you would’ve been at the terrible-two stage. As stubborn as you are, I bet your folks knew better than to try and potty train you early. So, yes, my guess is you were definitely still pissing your pants the last time I did high school algebra.”

Bo’s jaw sagged. His mouth opened and closed a few times as his brows drew together. “Jeez. You really are old.”

Before Adam could retort with an exaggerated show of offense, Bo shot him one of his patented belly-twisting, heart-stopping grins. Adam huffed out a calming breath to get himself under control before returning the smile. “Whataya say we call it quits a bit early tonight? We’re a month into this miserable shit. Halfway done. I’d say that calls for a celebration.”

“A celebration?” Bo squinted his eyes. “I need more information before I agree to anything. You’re a man who can’t be trusted with surprises.”

Adam let his wrist go limp before pointing to his chest. He popped his brows and drew back his chin in faux shock. “Who, me?”

“Yes, you.” Bo glowered. “If you aren’t ruining my beautiful new clothes with sticky fake blood, you’re assaulting my ears with crappy music, or landing me on the wrong side of a grumpy bouncer. My tailbone is still bruised from that behemoth throwing me out on my backside.”

Guilt pinched Adam’s stomach. He hadn’t meant for Bo to get tossed out of his favorite club the previous weekend. He was so used to waltzing through the entrance of 1 OAK at the Mirage unchecked—the velvet rope lifted and his path cleared without question—that he hadn’t considered his tagalong would warrant different treatment.

“Okay, okay, fine.” Adam harrumphed. “No surprises. How about plain old dinner? We could hit up Giada for old time’s sake.”

Bo slammed his workbook shut and smirked. “I’m game, but only if there’s no fake blood in my immediate future.”

Adam held up his trusty three-finger Boy Scout salute. “On my honor.”

“I should get my head examined for trusting a curmudgeon like you not to tell a lie.” Rolling his eyes, Bo rose to his feet. “Come on, old man. Let’s get some food.” 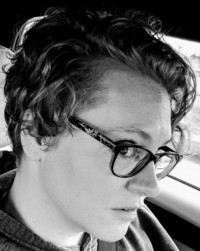 Evie Drae has won first place in seven Romance Writers of America® competitions and is a double finalist in the 2019 Golden Heart®. She landed her literary agent Eva Scalzo from Speilburg Literary following a dual win in the 2018 RWA® Heart to Heart.

She loves encouraging her fellow writers and started the #writeLGBTQ and #promoLGBTQ hashtags on Twitter to support LGBTQ+ authors and allies. She is married to the love of her life, is the mother of three fur babies, and runs almost entirely on coffee and good vibes.