She came to the beach to write…

But she’s getting distracted by the surfer next door.

Jenna, a single mom and successful author, has five weeks to deliver her next young adult novel to the publisher. This year’s summer getaway with her kids will be a working vacation.

The only problem? Lucas, the devil-may-care surfer in the beach rental next to hers. He cranks up his music at night, hosts loud volleyball matches, and allows his dog to run around at will.

Jenna often blames him for her writer’s block. But before long, she begins to see a new side of her neighbor at the shore. Maybe opposites do attract…but will that attraction fade like a sunset once summer is gone?

Lucas McKinnon unzipped his wet suit, peeled it down to his waist, and let the spray of the outdoor shower beat the salt and sand off his torso. If there was one thing he liked almost as much as a morning surf, it was a nice, hot shower afterward. The fact that the shower on the lower deck of the beach house offered him a clear, unobstructed view of the shore made it even sweeter.

The sea was unusually still today, as smooth and glassy as a mirror. Not so great for surfing, but undeniably pretty to look at it. Without the usual spray coming off the breakers, he could see the lighthouse looming in the distance. Just off the shore, a pair of dolphins crested the flat surface of the water, their silver forms glistening in the morning sunlight.

The calm before the storm.

Or so it seemed. In reality, the forecast was mild. Lucas checked the surf report every day like clockwork, and according to the TybeeWaves web site, there wouldn’t be a raindrop in sight. Still, he couldn’t remember the last time his little slice of the beach had been so serene. It was nearly as unsettling as it was beautiful.

Then, just as he was about to flick the shower faucet to the off position, the stillness of the moment came to a colorful, bewildering close as a woman came bounding down the stairs.

“What the heck?” She gaped at him, wide-eyed and frozen in place.

For a minute, Lucas thought she might turn around and bolt back up the stairs.

“Whoa. Sorry, I’m sorry. I didn’t expect a shower.” Cheeks ablaze, she swallowed and averted her gaze. “Right in the middle of our place.”

“Sorry about that.” He gave the faucet a crank to the left and the shower’s stream came to a dripping halt. “You must be the new neighbor.”

The trickle of water slowed to a stop.

Three slow drops, and she still couldn’t bring herself to look at him.

“Um, yeah. We just checked in,” she said to a nearby hibiscus bush, then nodded at the bin in her hands. “I just wanted to find somewhere to put this.”

Wow, this was one jumpy woman. Lucas wasn’t sure he’d ever seen a person who vibrated with such nervous energy. It rolled off of her in waves.

The forecast had been wrong. A storm had most definitely come to town. From the looks of things, a Category Four. Maybe even a Five. 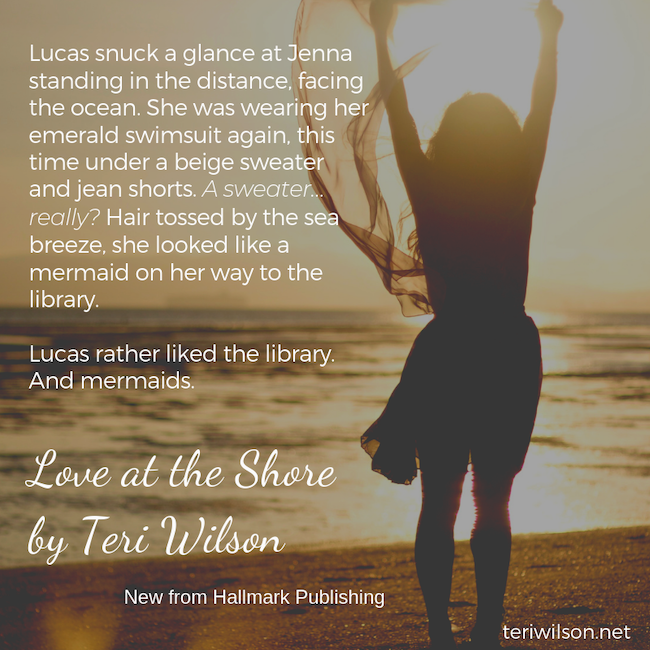 Teri Wilson is the author/creator of the Hallmark Channel Original Movies UNLEASHING MR. DARCY, MARRYING MR. DARCY, THE ART OF US and NORTHERN LIGHTS OF CHRISTMAS, based on her book SLEIGH BELL SWEETHEARTS. She is a three-time finalist for the prestigious RITA Award for excellence in romantic fiction. Teri has a major weakness for cute animals, pretty dresses and Audrey Hepburn films, and she loves following the British royal family.