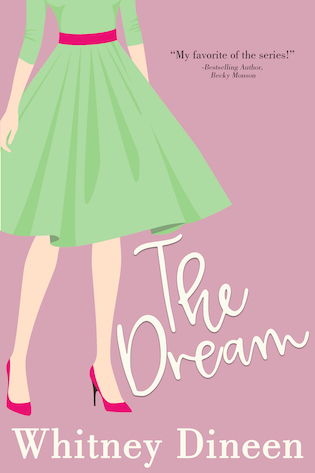 Ashley has loved the same boy since high school. She knew Davis Frothingham was special even before he championed her at her senior prom. She also knew he was completely out of her league.

Years later, her attraction for him is still there, but Davis? He doesn’t even remember her.

When Ashley is tasked with being the nurse for Davis’ terminally ill grandmother, she’s thrown back into his world. More than anything, she wants him to remember her, but that recollection could come at a price of its own.

Can Ashley accept that she’s good enough for Davis? And can Davis learn to love a girl from the wrong side of the tracks?

Find out in this delightfully fun romcom about love and life in Creek Water, Missouri!

“Do you have a boyfriend?”

“Do you have a girlfriend?” I retaliate.

We’re sitting and staring at each other when Davis puts his hand on mine. He clears his throat in preparation to speak. A wave of anticipation washes over me, and I subconsciously hold my breath like I’m deep sea diving without an oxygen tank.

He’s probably not going to say, “Ashley, I’ve known who you were since the moment I saw you in the nursing home. I’ve secretly loved you since high school and wanted more than anything to tell you the depth of my feelings ever since, but I was afraid you’d turn me down.”

I’m fully aware I’m having some kind of mental break here, so you’re just gonna have to bear with me. I’m pretty sure he isn’t going to declare, “You’re the woman of my dreams and I long to hold you in my arms until the end of time.”

Chances are he won’t conclude this imaginary monologue by picking me up and carrying me out of the restaurant so he can take me to his house and ravish me. But the bottom line is that we’ll never know because just as he opens his mouth, a voice behind me says, “Davis Frothingham? My heavens, how long has it been? You look positively wonderful!”

Davis’s eyes move upward as he sees my unwelcome ghost from adolescence past. “Jessica. I didn’t know you were back in town. Are you visiting for long?”

“No, sir.” I can hear the interest in her tone as clear as day. “I just moved back to Creek Water. I thought for sure Beau would have told you.”

If Beau is involved, that probably means she’s buying a house, which would mean she’s not planning anything temporary. Crap. Why the heck is everyone coming back?

“Welcome home,” he tells her. Then he motions toward me. “This is …”

But before he can say my name, she looks at me and declares, “Oh hey, it’s you, from the bathroom!” She’s as excited as if I were a long-lost sorority sister.

“Hey,” I somehow manage while my throat constricts in terror. The Jessica Holt I know from high school would full on poop a brick if she knew she was being nice to FelAshleyO MoanRow. The good news is that Davis never said my name, and Jessica is so self-absorbed she doesn’t seem to care who I am.

The waitress comes over and delivers several plates including the filet, a lobster tail, and a caesar salad. As delicious as everything looks, I’m not sure I’ll be able to eat a bite of it.

“Do y’all work together or something?” Jessica asks once our food is situated. How insulting. She should assume we’re on a date considering our close physical proximity—side-by-side, not across from each other— but the thought doesn’t appear to occur to her.

I let Davis answer the question. “I work alone, carving furniture,” he says, not offering any other explanation.

“That’s right,” Jessica declares. “I have a couple of clients I’d like to send your way. Maybe I can stop by your workshop sometime this week.”

“Sure,” Davis replies. “I’m on the first floor of the Creeky Button Factory. Just ring the bell and I’ll let you in.”

“I can’t wait,” she enthuses. Then much less excitedly, she adds, “I guess I’d better get going. We just finished dinner and my folks are waiting in the car.” She lingers as though Davis might invite her to join us and perhaps even offer to take her home afterward.

I can’t let that happen, so I boldly put my hand on Davis’s arm and announce, “Don’t let us keep you. Have a good night.”

Davis’s mouth turns up at the corners into a lopsided smile like he’s trying to keep from laughing out loud. Then he tells his ex-girlfriend, “It was nice seeing you, Jessica. Have a good night.”

Jessica does not look happy. I want to take out my phone and snap a picture of her, so I can enjoy her expression at my leisure. Being that wouldn’t paint me in the best light, I don’t do it. But oh, boy, if I did, I’d print a hundred copies and hang them all over my trailer.

Whitney loves to laugh, play with her kids, bake, and eat french fries — not always in that order.

Whitney is a multi-award-winning author of romcoms, non-fiction humor, and middle reader fiction. Basically, she writes whatever the voices in her head tell her to.

She lives in the beautiful Pacific Northwest with her husband, Jimmy, where they raise children, chickens, and organic vegetables.

Finalist at the Book Excellence Awards, 2017