“WOWOWOW. Poignant, hot, and riddled with all the tension and feels I adore in a new adult romance!”

Download your copy today or read FREE in Kindle Unlimited!

Donovan Kennedy is the girl dreams are made of.

Five years ago, she was our best friend.

The girl that held our hands everywhere we went.

The three of us were young. Innocent.

Nothing could touch us — not even heartache.

Now she’s back. All grown up.

With red lips and long legs — a challenge waiting to be accepted. A prize that’ll turn our world upside down.

We never expected to fall for the girl.

In the end, she’ll only choose one —Me. 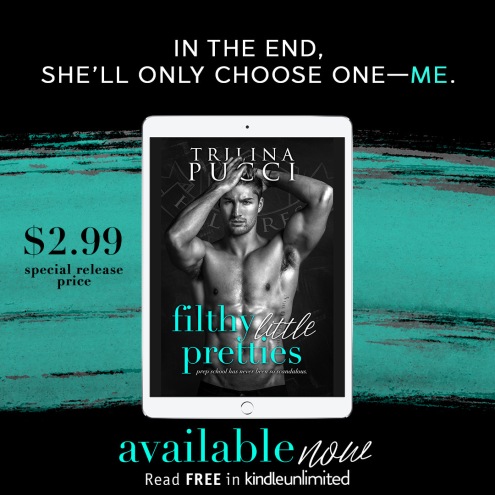 Blurring the lines between love, friendship, hate, lust and lies. This HS eats the weak and they’ll all have to make decisions, some that hurt your heart. Friendships and romance aren’t easy, especially when there’s multiple hearts involved

A group of high school kids known from their elite families have everything they could want and more. Except love. None of them have easily received it so it’s only fair that they don’t easily give it.

Except in Donavan’s case. The trio can’t help but
Love each other. Grey is the brooding one, Liam the charmer and Donavan is the woman who keeps them all together.

But after a 5 year separation, Donavan’s return has the boys stunned. The love is still there but it’s not as platonic. The boys she had to leave behind are all grown up and they both call to her even though she can’t admit it.

I couldn’t imagine being in Donovan’s position and trying to do what’s right especially with the intense game of tug of rope. No matter her choice all the characters came Out winners in the end. It wasn’t an easy ride and I was definitely questioning some of the character’s and their morals.

But as they say, all is fair in love in & war

After all the anticipation I was all in for this book & ready for all dirty details. Each character had their own story and I couldn’t get enough. Needles to say I adored it.

Trilina is an author, wife, and mama to three rowdy kiddos. When she isn’t making grilled cheese sandwiches, she can be found writing saucy novels that titillate and excite her readers.

Pucci’s journey started impulsively. She wanted to check off a box on her bucket list. But what began as fulfillment has become incredibly fulfilling. And now she can’t see her life without her characters, her readers and this community.

She currently resides in Northern California with her Italian stallion and her feral children, where the days are slow and easy and wine pours are heavy. (just kidding…maybe)