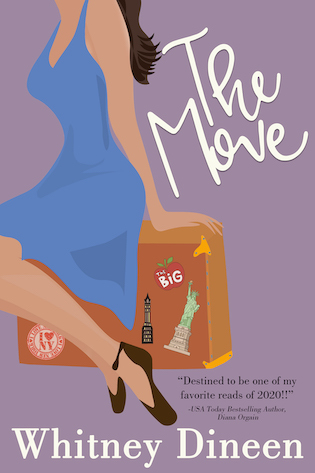 When Lexi Blake was twelve years old, a fortune teller gave her the following cryptic message:

In your thirtieth year, once the dog jumps over you, your life will change in the most unexpected ways.

Lexi is thirty now and the following unexpected things have occurred:

•While walking through Central Park enjoying a beautiful fall day, Lexi eats dirt when a careless dog owner throws a frisbee at her head. A dog jumps over her.

•Lexi gets a promotion that pays less than her current job.

•Her crush announces that he’s engaged.

•Her apartment turns condo and she can’t afford the down payment.

In order to escape her bad luck, she takes a vacation to visit a good friend in Creek Water, Missouri. But as it turns out, fate has a lot more in store for Lexi Blake.

Will a good friend, an unexpected love interest, and a historic house have her scrapping her plans and moving to a small town on the banks of the Mississippi River? Find out in the delightfully funny rom-com that’s sure to make you believe in happy endings!

I turn to give Emmie’s cousin a wave of greeting. We haven’t met yet, but I’ve heard so many Beau stories over the years that I feel like I already know him. I’m not at all prepared for the sight that greets me. I imagined Beau would look a lot like Emmie: tall, blond, medium build. What I see instead is a masculine tower of solid, dark, brooding, hunka-hunka burning love. I mean seriously, WOW. My mouth hangs open in a most awkward fashion, and I force it shut before I drool on my shoes or something.

Beau glides by in his perfectly faded jeans that fit like they were made for him—every contour deliciously showcased, like the mice from Cinderella sewed them especially for him. He’s wearing a blue dress shirt rolled up at the sleeves, highlighting forearms that are no stranger to physical work. He must not have seen me—maybe because I’ve already climbed two steps to the second floor—because he says to Emmie, “That woman is going to be the death of me.”

“Who else? I swear to God when Cootie was pregnant with her she must have drunk a gallon of vinegar a day. That gal is as ornery as the day is long.”

“Before you tell me what she did, I’d like you to meet my friend Lexi from New York.” Emmie gestures in such a way as to let Beau know that I’m standing behind him.

He turns to say hello, and my jaw drops open at the sheer impact of looking straight into his piercing eyes. I snap my lips shut, realizing my open-mouthed sea bass look might have him wondering if I’m mentally challenged.

Beau’s stare is so intense that I hurry to say, “I’ll go on upstairs so you two can talk.” God knows what personal things he might have said had Emmie not alerted him of my presence. I don’t wait for either of them to reply before dashing up to the sleeping loft. Of course, it’s an open loft, so I can still hear every word they say, but at least the privacy is implied.

“You know the dance the club has right after Thanksgiving?” I hear Beau ask.

Emmie replies, “The Cornucopia Ball? What of it?”

“Cootie has proposed that this year the club members elect a king and queen of the ball and she wants me and Shelby to campaign for it.”

Emmie starts laughing. “No! You know they’ll make you wear a cornucopia on your head if you win.” She’s giggling so hard she can barely catch her breath.

“Can you imagine?” Beau asks. “I’d feel like Henry the Eighth or something. No, sir, I’m not doin’ it.” A moment later he adds, “Shelby thinks it’s because I hate her mother.”

“I told her, ‘Shelby, it’s not just ’cause I hate your mama, it’s because it’s the darned stupidest thing I’ve ever heard of and I won’t be a party to it.’ I may have also mentioned that I don’t even want to go.”

“Beauregard Frothingham, you cannot skip the ball! My god, Cootie would never let you live it down.”

“Those demented club ladies are not the boss of me, Emmie. I have never danced to their tune, and I’m not gonna start now.”

“I’m guessing you mentioned that to Shelby?”

“Ya think? Beau, that dance is the second biggest event the club throws next to the New Years’ Eve gala. They nominate the committee who organizes the following year’s ball the day after the current event. For a whole year, they’re girdle-deep in the trenches, planning it.” Then she calls up the stairs, “Come on down, Lex, I want to show you the rest of the first floor.”

I quickly descend as I was sitting at the top of the staircase blatantly eavesdropping—while trying to catch the breath that was stolen from me when I saw Beau.

When I appear, Emmie’s cousin looks at me and his gorgeous green eyes squint together before he blatantly frowns at me. I come to a quick stop. I’m not sure if it’s because I look deranged from traveling or what, but I get the sense he’s taken an immediate dislike to me.

I step forward to shake his hand, having forgotten I’m still on the second stair and I wind up falling down like a drunken circus clown. Emmie rushes to my side, “Lexi, are you okay?” She reaches to give me a hand up while her cousin does nothing more than stand there and stare at me.

“I’m fine,” I say, hurrying to my feet. “I thought I’d shake Beau’s hand and didn’t realize I was still on the second stair. I must be tired from my flight.” Or, you know, an idiot.

“You poor thing,” Emmie says. “Why don’t you come on over here to the couch and sit down. I’ll get you a nice glass of water.”

I do as she suggests, wondering how a glass of cold water is going recoup my dignity after making a fool of myself in front of the most gorgeous man I’ve ever seen. Beau has not moved an inch, either to aid me or greet me. Emmie passes by him as she walks toward the open-concept kitchen. She punches him in the stomach and says, “Don’t be such a dolt. Be sociable.”

Beau’s feet eventually start to move in my direction. Once he reaches the couch, he stops right in front of me, nearly boring holes through me with the intensity of his gaze. He demands, “Who are you again?”

Whitney loves to laugh, play with her kids, bake, and eat french fries — not always in that order.

Whitney is a multi-award-winning author of romcoms, non-fiction humor, and middle reader fiction. Basically, she writes whatever the voices in her head tell her to.

She lives in the beautiful Pacific Northwest with her husband, Jimmy, where they raise children, chickens, and organic vegetables.

Finalist at the Book Excellence Awards, 2017