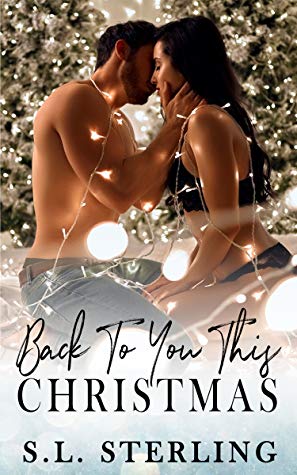 This Christmas, all I wanted was to wallow in self-pity until the woman I thought was the love of my life could explain why she left me at the altar. Instead, my buddy, Zach forced holiday merriment on me. I thought it was going to be a tinsel-laced nightmare… until his sister, Alexa, showed up. Turns out, she grew up into a gorgeous present I was insanely tempted to unwrap. Lucky for me, she shared my desire to meet under the metaphorical mistletoe… and let things heat up from there.

For the first time in months, Laura, my ex, wasn’t haunting my thoughts like the Ghost of Christmas Past. Which, of course, is exactly why she had to pick that moment to call and say she wanted to talk. I could only hope St. Nick had a playbook in his sleigh because things were about to get complicated.

I was still awake at two in the morning. I was now lying in the dark, staring up at the ceiling. I had heard Zach come in around twelve-thirty and heard Mom and Dad come up to bed shortly after that. The house was now quiet, except for the sound of Dad snoring off in the distance. I lay in the warmth of my bed, my mind still reeling with thoughts of Drew, alone, across the hall. Drew had everything: good looks, a great job, he was successful, and for the life of me I couldn’t figure out why some girl who’d had him would ever let him go. I’d give anything for a chance with a guy like him. Well, not just any guy, and here she was just throwing him away as if he were last night’s trash.

I rolled over onto my side and let out a sigh. I needed to get my mind off him, and knowing he was right across the hall wasn’t helping. The first thought that came to my mind as I rolled back over and stared up at the ceiling was cake. Mom had a coconut cream cake downstairs in the fridge, and the more I thought of it, the more I wanted a piece.

Finally, the craving won and I got up, threw on a pair of socks, and slipped out of my room. The house was silent, and I tiptoed down the stairs, carefully avoiding the creaky steps. I could see a tiny light that we always left on in the kitchen. I came around the corner to see Drew, shirtless, his sleep pants hung low on his hips, standing with his back to me. He hadn’t seen me, or so I thought, and I was about to scurry back up the steps when he spoke.

“Hey, you want some cake?” he asked, holding out a plate with a slice on it. I came slowly around the corner, my eyes firmly planted on his chest and abs. Fuck. The man looked like one of the lingerie models I had photographed. He was so cut and well-defined. When my eyes met his, I saw him take a quick glance down my body, and that was when I realized I was in nothing but a short T-shirt and panties.

“Couldn’t sleep?” I asked, taking the plate from his hand. My fingers brushed his, the contact sending a jolt through my body.

“No, and I couldn’t get the thought of cake out of my mind either. Your mom makes damn good cake, and this one just happens to be my favorite,” Drew said, watching as I tried to hide my half-naked body behind the counter, a half-smile coming to his lips.

“What’s so funny?” I asked as he turned and cut another slice of cake, placing it on another plate.

He turned around with fork in hand and dug into the soft, moist cake. He leaned up against the counter, his eyes roaming what he could see of my body as he ate. “I just think that it’s cute that you are trying to hide from me. Especially when you don’t need to hide from me, Lexi. I’ve known you pretty much your entire life. I’ve seen you in less clothing than that. We spent many summers all together by the pool.”

I felt a blush rise to my cheeks. “I’m not hiding. I just wasn’t expecting anybody to be up at this time. Besides, I’m not exactly dressed for a friendly chat. You’ve known me all your life, with clothes on,” I said, nervously laughing, and stepped around the corner of the island, setting my plate down.

“So, look at me!” he exclaimed, holding his hands out to the side like he was putting himself on display. “Do I look like I’m dressed for a friendly chat?”

“Yeah, look at you, Mr. Eight-Pack.” I rolled my eyes. “Do you want some milk?” I asked, holding the corner of my shirt down and raising my arm up into the cupboard for a glass.

I could feel his eyes burning into me as I reached for another glass and got the milk out of the fridge. I quickly poured two glasses and turned around, only to see him still staring at me. I did my best to ignore it and slid his glass over to him, returning to my slice of cake. I tried hard to avoid eye contact with him, but it was almost impossible, and when I checked him out again, I could see the outline of his semi-rigid cock through his sleep pants. I bit my lower lip and ate the last bite of the cake on my plate. Drew was already done with his and had put his plate into the sink. I walked over and put my plate in the sink on top of his while he put the cake back into the fridge.

I was about to turn around to grab his glass when I felt the heat of his body against my back. I could barely breathe and was afraid to move, so I grabbed the dishcloth, preparing to wash up the dishes we had used. I turned toward the sink and was just about to turn the water on when I felt his fingers dance along the edge of my panty-line. Drew was touching me. Drew, the same boy who used to pick on me, was now standing behind me, a man, running his fingers against my bare skin. His touch was almost paralyzing as I struggled to breathe. He was so close to me that I could feel the light puff of his breath on the back of my neck. I could feel myself get instantly wet, and I bit my lower lip and closed my eyes as his fingers tickled along the side of my belly to grip the edge of my T-shirt and pull it down to cover over my ass.

As soon as I was covered, he leaned in, his scent intoxicating, and whispered in my ear, “Thanks for the cake. Good night, Lexi.”

I closed my eyes. His hands were still grazing my skin, and I stood there allowing the room to spin around me. His hands then went to my hips and rested there for a couple of seconds, his warm touch searing into my skin, and then, as quickly as he was there, he was gone. The heat from his touch was gone. I turned around. He hadn’t gone far; he was leaning against the other counter across from me, intensely watching me. I looked into his eyes and caught a glimpse of what I was sure was want.

At first, the look scared me a little because, well, this was Drew. He then stepped closer to me, the closeness of his body making my nipples harden. I watched his eyes leave mine and look down at my lips, the silence around us almost deafening. I was almost sure he was going to lean in and kiss me, but the sound of the house settling caused him to back away.

Without saying a word, he left the kitchen and made his way back upstairs to his bedroom, leaving me alone in the dim light of the kitchen. 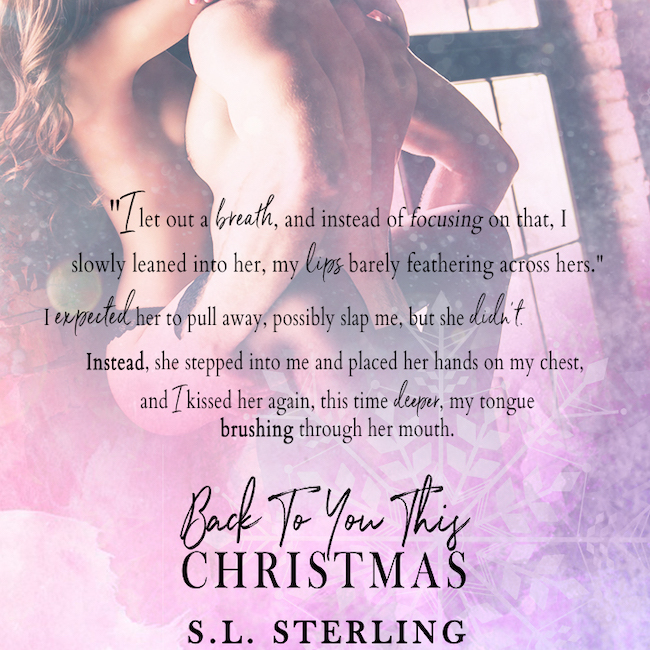 S.L. Sterling was born and raised in southern Ontario. She now lives in Northern Ontario Canada and is married to her best friend and soul mate and their two dogs.

An avid reader all her life, S.L. Sterling dreamt of becoming an author. She decided to give writing a try after one of her favorite authors launched a course on how to write your novel. This course gave her the push she needed to put pen to paper and her debut novel “It Was Always You” was born.

When S.L. Sterling isn’t writing or plotting her next novel she can be found curled up with a cup of coffee, blanket and the newest romance novel from one of her favorite authors on her e-reader. Her favorite authors include Kendall Ryan, Vi Keeland, Penelope Ward, Lauren Blakely, Alessandra Torre and Willow Winters.

In her spare time, she enjoys camping, hiking, sunny destinations, spending quality time with family and friends and of course reading.