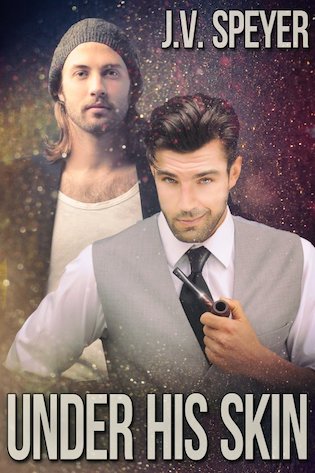 A brilliant scientist out to save the world. A jaded agent looking to save the one he lost. And a conspiracy that spans oceans, reaching into the deepest parts of American national security.

Lennon is a genius. He’s devoted his energy and his time to designing products to save lives. He’s gotten rich doing it, too. This time he’s created something to revolutionize war, crime, and policing – a bullet that heals. He’s on top of the world and the one thing he needs is someone to share it with. The one he loved disappeared without a trace years ago, and until he gets closure he can’t commit.

Ben is an agent with an agency so secretive for years people didn’t know it existed. He screwed up years ago and fell in love with the man he was supposed to be guarding. Now his lost love is in danger again. He’s developed a product bad actors all over the world will want to get their hands on. When Ben’s superiors order him back to Lennon’s side, he goes without hesitation. There’s only one catch – Lennon can’t know he’s there.

When one of those bad actors strikes, all the rules go out the window. Can Lennon overcome his mistrust once he knows the truth about Ben? When the enemy turns up the heat, will Ben manage to save Lennon from people who want him to kill?

Ben checked his look in the mirror. Everyone had their “thing,” something that would throw the entire meeting or experience off for them, and there was nothing that could rescue it. For Ben, it was talking to someone who had food stuck in their teeth. Anyone reporting to him knew that they needed to clean their teeth before stopping in for a meeting.

Ben’s commanding officer, Agent Dickinson, had a thing about people’s ties. They had to be perfectly straight and not askew in any way. Ben could remember coming out of a fight with a spy from a drug cartel, trying to make an immediate report to Agent Dickinson, and getting dressed down because his tie was crooked. Ben had been bleeding from a stab wound at the time. Agent Dickinson had been so distracted by the messy tie he couldn’t see the blood.

Ben wasn’t bleeding now. He had no legitimate excuse to be slovenly. He straightened his tie and brushed a few pieces of lint from the jacket as well. Then he headed out to go and face Agent Dickinson.

Dickinson waited for him in his office. A giant American flag stood behind him. Dickinson wasn’t usually that guy. They all knew where they were and who they were working for; they didn’t need to be clubbed over the head with it every time they walked into a room. The ever-present flags had come in with the new administration. Every room had to have a flag now. It was a mandate. Every room had to have a flag, and every lapel had to have a flag pin. Apparently the new president thought people would get confused without them.

“Siddown, Kellogg.” Dickinson drummed his fingertips on the desk for a moment and then he sighed. “It looks like we’ve got a burgeoning situation in Boston.”

Ben felt a twinge in his heart, but he ignored it. An agent wasn’t supposed to get twinges in his heart. An agent shouldn’t have felt anything for someone in his charge to begin with. Besides, Lennon had almost certainly moved on a long time ago. He probably had a movie star partner now. Maybe he’d married a model. Maybe they stood around looking gorgeous together on the red carpet.

“Kellogg!” Dickinson slapped his hand on his desk, making Ben jump. “You paying attention or you going to sit there and gather wool on the taxpayers’ dime?”

“Sorry sir.” Ben straightened up and forced his brain to focus. “Just trying to think of which Boston situation you could be referring to.”

Dickinson acknowledged Ben’s point with an incline of his head. “That place always was a hotbed of sedition. I’m talking about the ongoing operation at Interior, Inc.”

Ben had been trained to show no reaction to any stimuli, so he was able to keep his face neutral and relaxed when his supervisor mentioned Lennon’s company. Ben had very carefully not followed the company’s progress, at least not where anyone could track him. He didn’t want to get bitter toward the Agency. “I’ve been kept in the dark about the operation at Interior, sir.”

“And for good reason, too. You’ve been kept in the dark because you couldn’t keep it in your pants, and don’t think I’ve forgotten that.” Dickinson waved a finger at Ben. “But it’s been a good decade since then. With any luck, the threat can be neutralized without any issues at all. No one will ever need to know you were involved.”

Ben couldn’t help but close his eyes at that. He didn’t have any choice about it, of course. An agent couldn’t choose his assignments. It seemed egregiously cruel to put him on an assignment this close to Lennon and not let him speak to or see his old lover, but the Agency didn’t choose its assignments for the agents’ benefit.

He opened his eyes again. He would do what he had to. He knew Dickinson wouldn’t ask it of him lightly. “Okay. What’s the threat and what’s behind it?”

Dickinson nodded once, a little bit of grudging pride showing through in the gleam of his eyes. “You know what Interior does, correct?”

J. V. Speyer has lived in upstate New York and rural Catalonia before settling in the greater Boston area. She has worked in archaeology, security, accountancy, finance, and non-profit management. She currently lives just south of Boston in a house old enough to remember when her town was a tavern community with a farming problem. (No, really. John Adams complained about it. A lot.)

When not writing, J. V. enjoys watching baseball and seeking out all of New England’s creepiest spots. Her Spawn has turned her into a hockey enthusiast. She can be bribed with gin, tequila, and cats.