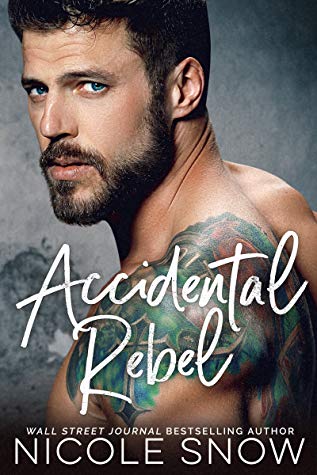 Accidentally hitched to a dream. Now for the catch…

One crank call and I’m insta-wife to a tattooed behemoth and mother to his kids.

He’s paying my idiot boss a fortune for the perfect cover.

Because trouble found Miller Rush, and he found me.

A rock hard, overprotective rebel with a cause.

Father of the century.

Abs wound tighter than his attitude, stomping around my house, barking orders.

Something’s got to give, okay?

Not my courage, even when my nosy mother smells drama.

Not my heart set on helping two little angels and their perma-grump dad.

Definitely not my body screaming Mayday because his bedroom eyes are magnets.

It’s only a few weeks.

It’s only a whole crew of freaky people coming after him.

It’s only pretend and I’m so not letting this Mrs. Rush thing go to my head.

Why didn’t anyone warn me some knots can’t be untied?

From Wall Street Journal bestselling author Nicole Snow – a high stakes marriage mistake with a twist. One hulking superdad hero goes all-in to save his family and the wife he wasn’t supposed to keep. Full-length romance novel with a Happily Ever After sugar rush.

I snap open my eyes at Miller’s question. My fake husband leans against the short wall that separates the entryway from the living room. And to be perfectly honest, he looks like he just stepped out of one of my mother’s books.

Just what I need right now. A brutal reminder of how huge and hot he is, and how he’s probably as sick of this stuff as I am.

His dark hair is cut short, still rumpled from his nap. His black shirt hugs his broad chest like a second skin. So do the black jeans, and even in his socks, you could just eat him up. Whipped cream optional.

The worst part is, it’s a normal, almost boring look. How can that be sexy?

Hell if I know, but it is. Something hums in my veins I’ve never felt before, this heated rush that has far too much to do with Mr. Rush and not the adrenaline attack of the past twenty-four hours.

I try to nod. My name rolls off his tongue like warm caramel drips down the side of a scoop of vanilla ice cream.

His bright-blue eyes no longer look so tired, so worn out. Now they have a shine to them.

This guy and his twins are on the lam. That’s got to bother him deeply. Heck, I’m not even him, this isn’t my mess, and it’s not any easier for me.

If only that were true. Because I went and made it my mess when I let Manny talk me into helping Miller Rush twice.

I push off the door, hating how flustered I must look. “I’m fine. Let’s just eat.”

He doesn’t have to remind me. My entire house has never smelled this good in my life. It pales even compared to the time I tried to cook a whole turkey dinner for Mother and her happy little M.E. Court team. She wound up rushing to my rescue. Turns out my cooking skills are far more impressive in my head.

Maybe I’m dreaming this. An overly handsome, wildly sexy stranger in my house has just cooked up a fabulous meal from my meagerly supplied cupboards. That’s more than a dream.

Nicole Snow is a Wall Street Journal and USA Today bestselling author. She found her love of writing by hashing out love scenes on lunch breaks and plotting her great escape from boardrooms. Her work roared onto the indie romance scene in 2014 with her Grizzlies MC series.

Since then Snow aims for the very best in growly, heart-of-gold alpha heroes, unbelievable suspense, and swoon storms aplenty. With over a million books sold, she lives for the joy of making two people fight with every bit of their soul for a Happily Ever After.