Daughter, covet not thy mother’s husband.

Isn’t that a saying?

I know it isn’t, but in my case it really should be.

Because, in my case, I didn’t just walk up to the line, I crossed so far over it that I can no longer recall how I got there in the first place.

What line did I soar over? The line leading up to him.

Oh, and he’s married to my mother.

I didn’t seek this out as a way of life, but once I had my first taste of it—and him—handed to me on a glistening silver platter, I felt I owed it to myself to enjoy every delicacy offered to me while I could.

I suppose I should have known that my guilty pleasures couldn’t possibly last forever, and when our relationship took a decidedly nasty turn, I was left feeling utterly dejected.

Guided by my resentment, I threw caution to the wind and allowed myself to fall into the arms of another man.

Not just any man. The man in question is none other than Ethan—Owen’s absentee son.

After Owen left me so bitter, I realized that Ethan represented the ultimate escape … and I must admit, revenge.

Why not? He’s gorgeous, charming, and witty to boot.

As an added bonus, he’s single.

But … Owen has other ideas. He has decided that no other man can have me but him.

I am his … and he will stop at nothing to keep it that way. 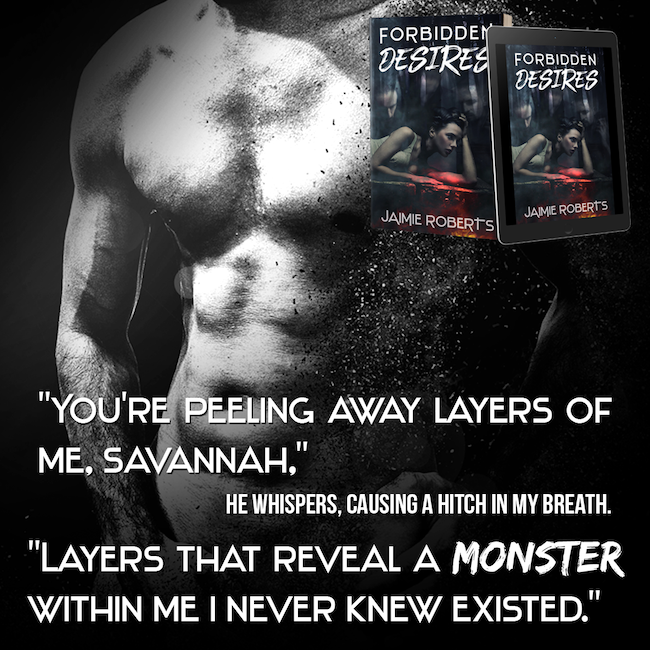 Jaimie Roberts was born in London, but moved to Gibraltar in 2001. She is married with two sons, and in her spare time, she writes.

In June 2013, Jaimie published her first book, Take a Breath, with the second released in November 2013. With the reviews, Jaimie took time out to read and learn how to become a better writer. She gets tremendous enjoyment out of writing, and even more so from the feedback she receives.