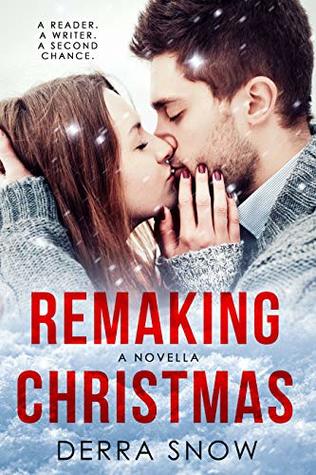 Ada’s love life is a wreck. She knows true love and happily-ever-afters only exist in the books she reads.

It’s Christmas again. For the first time, she’s going to Green Mountain Inn to get away from her woes. But there’s not the only reason. It’s her favorite romance author Patricia Millett’s rumored hangout spot.

There, Ada runs into Warren, a charming guy, who’s also has his share of woes. But there’s more to Warren than just his good looks, something Ada could never imagine. And Ada soon finds herself lured by the hope of romance that has failed her terribly before. Will Warren restore trust her trust in love or become yet another mistake?

Turning, Ada saw the last person she expected to.

Still, Ada didn’t know what to say. Last time, he’d basically run away from her like she had a catching case of pneumonia, and now he was genuinely happy to see her?

Was this guy bipolar something? Either that or suffering from some dark secret.

Well, Ada reflected a bit sadly, we all have our secrets.

“Sorry about before,” he said now. “This place has a lot of memories for me. Good and bad. I’m still trying to get over the bad.”

“It’s okay,” Ada admitted. “I came here to get over some things, too.”

He nodded, not prying more. That worked for Ada just fine. She wouldn’t ask him to show her his if he didn’t ask her to show him hers.

Warren’s gaze had moved to the cookies in her hand. “Good choice.”

Warren gave an adorable, crooked smile that Ada was starting to realize was his signature. “Ok, got me. Main thing is, are you a cookie and book type of person or not?”

“Definitely,” Ada said. “Although we probably don’t like the same type of books.”

“Okay.” Ada could feel her cheeks heating up already. Harlequins were her guilty pleasure, emphasis on the guilty. She never had any problem confiding in other women of her little hobby, but for some reason, maybe because of Robbie’s outright mockery of them, she always had trouble telling men. “Okay. I read romances.”

Warren’s face, sometimes such an open book, was hard to read.

“There,” Ada said. “Laugh if you want. But I even came here because I heard one of my favorite romance novelists Patricia Millett does.”

“I’m not going to laugh,” he said simply.

“No,” he said. “Not at all. There’s something about romances that other books don’t have. Maybe it’s the happy endings or the belief of the best in human relationships, I don’t know. But whatever it is, it’s nothing worth taking lightly or laughing about.”

Ada’s jaw dropped. “What are you, some kind of literature prof?”

“Aren’t you going to ask what my job is?” she teased.

“No,” she decided. Her office job bored her to tears. “Ask me about my cat.”

“All right. Tell me about your cat.”

Ada was about to say, I could do you one better and have you meet him, but she clamped her lips shut. What was going on with her?

Being around Warren like this made her forget herself. She felt so open and free, like she could say anything, and he would still smile at her with those kind eyes. She felt like she’d lost ten years in ten minutes.

Ada bit her lip. She had to be careful. Despite how she left, she hardly knew Warren, and hardly even knew what he did for a living. Literature professor? Was he serious?