Drew
It
was a tryst.
A
sin swallowed down by desire.
That’s
what I tell myself.
But
my body isn’t the only part that
aches
for him now.
I
sold my soul.
Now
my heart is a slave to the devil.
Dominic King.
He
unveiled the taboo,
illuminating
my lie
and
unexpectedly stole my heart.
But
I walked away.
Dominic
Lust
is my religion.
She
became my sanctuary.
If
it’s forgiveness she seeks
the
price just doubled.
And
she’ll pay it bound at my feet.
I
gave her pain for pleasure.
Her truth.
Now
I’ll make her beg me for more.
ADD TO GOODREADS

“Truth, I’ll never choose dare; I don’t trust myself or you.”

TRUTH IS….. Trilina Pucci has gotten me addicted to her saucy writing with this new book. Dominic King is a true alpha male, he’s both dangerously hot and literally dangerous. Truth will have you all hot and bothered while reading this book. It takes you to places you probably aren’t expecting to go, but god you’re sure gonna enjoy it

•“What kind of woman do you think I am King?”

I want to be the reflection I see in his eyes, but I’m scared.

“The kind that’s forgotten how much power she holds.”•

Dominic was a prime alpha male, with a background that I assume is Italian mob connections. Which just adds to his appeal. He’s a dangerous man but nothing makes his character more enjoyable than seeing how easily he can break for Drew. A lethal man with a heart is perfection. Plus He’s got a dirty mouth and dirty ideas to match.

•”It’s in this very moment that I know…I’ve sold my soul to the devil, and I don’t want it back.”•

Drew was a “take no shit” kind of girl. After losing her self in a bad relationship her attraction and chemistry with King throws her for a loop. She’s worried that her lust will cause her to degrade herself again. She doesn’t realize she’s using lust to convince herself it’s not love. And though She knows King is a scary man, she doesn’t let it derail her. Instead she fights him back, causing their chemistry to surge like crazy.

•”You’re so scared that you won’t be able to be here in the light with me, but I’d prefer to join you in the shadows.”•

Excerpt
“What are you willing to give me?” Because I want it all.
“I’m undecided.” I hate the look on his face. It’s fear,
he’s afraid I’ll hurt him again.
“So just tell me to stop when I cross a line. I’ll only go
as far as you trust me to go. Deal.” He nods his head hesitantly as my hand
finds the top button of his shirt, I undo it slowly making my way to each
before his shirt is completely undone. I only stop to briefly trace the tattoo
on his chest. God, I missed this body. His twelve pack casts a heavy shadow
from beneath the shirt and I run my fingers over his rock-hard stomach and up
to his chest, leaning in to kiss the tattooed area.
“This okay?” I ask from pressed lips against his chest
pulling back to look into his eyes.
“Fucking you isn’t my problem. It’s what to do with you
after.” Smacking his drink down on the bar top he puts his hands on my waist,
walking me backward away from the bar and then jerks me forward eliciting a
surprised yelp as I’m hoisted over his shoulder. “See that’s the problem”
bringing his hand down on my ass hard, “The way I see it, this is all you get.
I’ll give you my cock but that’s it. That’s the only deal I’ll make with you.
Take it or leave it.” It’s a start.
Without a hesitation I whisper, “Take it. But it won’t be
enough.” He places me back on my feet and looks me up and down, his expression
mirrors my own frustration.
“I hate that fucking outfit. I want you naked. Now.” His
words leave little room for debate.
“What? What’s wrong with my outfit?” I look at him like he’s
lost his mind.
“It restricts access…” crossing his arms he grins, waiting
for me to disrobe.
“I’m not taking off my clothes in the middle of this room.”
He has lost his mind.
“We’re alone and last I checked it’s a fucking sex club.
Take your goddamn clothes off so I can bury my dick inside that tight wet
pussy, Drew.”
I’m fucking dripping the minute he growls at me but I take
all the time in the world, slipping off each shoulder giving my tyrant his own
private show. The more time I take the more his jaw tenses. God, I love riling
this man up.
“You realize the longer you take the harsher the punishment.
I will take out every one of the seconds, on that ass tonight.”
“Promises, promises.” I challenge back. He grabs his cock
adjusting the bulge, groaning with the motion.
“You have ten seconds to get it off then I’m ripping it off
myself.” His demeanor couldn’t be more serious. He will tear this very expensive,
amazing outfit off my body without so much as a second thought.
“Ten.” I start on one of my heels unhitching the ankle
strap.
“Nine.” finishing, I move to the other.
“Eight.” The strap around my ankle gets stuck as I start to
panic. I’m never going to make it. Fuck! I’m so hot, I don’t know which outcome
I want more. His punishment or my victory.
“Seven.” Fuck it, I rip it off my foot and pull down my
right shoulder strap starting to shimmy.
“Six.” I start looking around the room, “Five.” I scope out
where I could go to buy some more time. “Four.” I love this outfit.
“Three.” Son-of-a-bitch.
“Two.” Struggling with the zipper it finally comes loose and
I push my jumpsuit down to my ankles.
“One.” 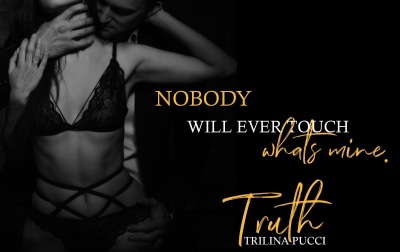