Kate Bright lost the love of her life to tragedy. Now all she wants is to pick up the pieces and shelter herself from further pain. The last thing she needs is the attention of a handsome, arrogant politician who hungers for publicity. But Kate has a hunger of her own, whether she likes it or not. Being with Blake will require her to step into the limelight in spite of her private torment. Do his feelings for her extend beyond the public stage?

Kate’s Congressman is the first standalone novel in the Bright Sisters Romance series.

Watch for other volumes, including June’s Arresting Officer, coming soon.

One awkward step from the balcony onto the marble flooring inside sent her lurching toward the floor. She steadied herself, struggling to keep from dropping her champagne flute, and fell into something warm and solid. An arm scooped her up at the waist, firm but gentle, supporting her until she righted herself. For a moment she found herself wishing to stay in this stranger’s embrace, awakening a need for human connection. Then embarrassment took hold as she stepped away from the warm, dark wool of his suit jacket.

“I am so sorry, I guess I just—” Her breath escaped her as she stared up into the eyes of her rescuer, all chiseled jaw and piercing green eyes. She blushed as she realized that strong arm and those broad shoulders belonged to the guest of honor, Congressman Blake Madsen.

“Hey, I assist where I can. Looks like I was in the right place at the right time, for once.” He smiled and seemed to nod to himself, fighting not to give her more than a quick once-over. But eyes didn’t lie, and his told her he liked what he saw, too.

“That may be the first time I’ve actually been helped by Congress,” she said, blushing and wondering where the statement had come from. “No offense.”

He laughed, a throaty sound that warmed her from head to toe and seemed much more genuine than she would have expected from a politician. “Is this a roast or a fundraiser?” he asked. She studied him as he spoke, admiring his features that seemed to be carved from granite. Damn, he was even better looking in person than on TV. She could certainly see how he got elected.

“I’m sorry,” she said, holding up her flute, intact in spite of her clumsiness. “At least I saved my drink. Would have been a shame to spill it on that lovely suit.” She fought a strong urge to place a hand on his lapel, explore the rich wool, maybe reach for that silk tie and unknot it ever so slightly. Her face burned hot as those full lips of his upturned ever so slightly into a smile.

“That would have been unfortunate,” he said. “I think that would mean you owed me your vote.” Her frown caused him to backpedal. “Just kidding. I’m fine with earning it the old fashioned way. I’m Blake Madsen.”

It was her turn to laugh. “Of course you are,” she said. “Anyone with access to a TV or the internet knows you.” And any red-blooded woman with anything resembling a pulse. She kept that bit to herself.

He raised his eyebrows at her. “And you are?”

“Katherine Bright,” Janice said from behind her, approaching them and placing a hand on her friend’s shoulder. “Kate to her friends, of which you are no doubt one, Congressman.”

Blake nodded, held out his hand. She pressed her own into his, fitting like a glove, and forced herself to withdraw it before things became awkward.

“Kate is a brilliant editor,” Janice said, neglecting to mention her post at Home Weekly. “She also arranged the printing of those amazing handouts at the front table. I don’t know what I would do without her.” She was on a roll and not about to stop. “She’s such a hard worker, I’m amazed I managed to talk her into coming tonight. I keep telling her, she needs to get out and enjoy herself more, get back in the dating pool, you know?”

Slick, Janice. Very smooth. Kate was not sure how, but her face burned even hotter.

He nodded. “I can sympathize.”

“That’s right,” Janice said, producing her phone and clicking furiously. “Of course, we all know Blake’s status, since he made the cut.” She passed her phone to Kate with an article loaded in the browser. Sexy Public Servants: The Hottest Eligible Bachelors on Capitol Hill. Blake grinned up at her from position number two on the list, though as far as she was concerned he smoked all the competition. At thirty-two, he was apparently one of the youngest members of Congress.

“Janice, please.” It was Blake’s turn to flush red. “We’re here to sell my campaign, not me.”

Janice smirked as she took her phone back. “Is there a difference? Sorry to interrupt, but the Wallaces just arrived, and you definitely want to make an impression.”

Kate shrugged, disappointed to be losing the focus of those intense green eyes. “It’s why we’re here, isn’t it? And it’s Kate, not Ms. Bright.”

He grinned. “Sure thing, Kate. To be continued.” 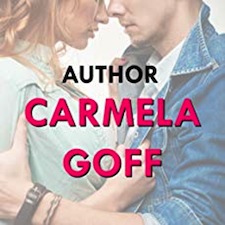 Carmela Goff grew up in sunny Southern California, where she studied history and fine arts before returning to her true love, the romance of words. She currently resides in California’s Central Valley with her husband and Maine Coon cats. When not dreaming up new stories, she can be found hiking and geocaching and tending to her ever-demanding garden.