Meet Cade in this juicy excerpt for GORGEOUS by Kristy Marie! Don’t forget to add it to your TBR!

Blurb:
Breck
My name is Brecklyn Brannon, and I’m not who I claim to be.

Cade
I’ve watched her for over a year.

Cade Jameson has entered the building, and holy alien babies, he’s wearing a motherfucking tank top with his dress shirt hanging open. Those delicious pecs toy with my emotions as they flex underneath the snug fabric, taunting me with ridiculous requests like: Bite me, Breck.

But Cade has some serious voodoo going on because I take an unintended step in his direction when he snaps, “Are you seriously getting him drunk, Hayes?” Cade charges over to the two drunks and snatches the bottle of liquor from the table before turning and pouring it down the sink.

“Aw! Come on, Major. I was just having a little fun with him. He had some nerves.”

Cade mumbles something low that sounds a lot like stupid motherfuckers.

“Cade.” Theo’s glassy eyes meet mine like he just realized I was here. And then he smirks at me. “Jameson,” he mutters.

“Don’t talk to me right now, Von Bremen. Commander is going to be fucking pissed that you’re drunk two hours before the wedding.”

Shoulders hunched, Cade sighs at the sink before straightening and walking to the table, sliding a glass of water in front of Theo. “Drink all of it.”

Theo laughs at the glass of water and tries to lay his head down on the table. “No, no, no. Stay upright,” Cade scolds, his tone laced with exasperation, pulling him up in the chair by his shoulders and then glaring at Hayes. “This is your mess. Sober his ass up right now.”

Cade loses his temper, yelling into the kitchen with the voice of a Marine. “What, Theo?”

You could hear a mouse burp in China. That’s how quiet it is in this kitchen until Theo snorts and points to me.

“Your jelly girl is behind you.” 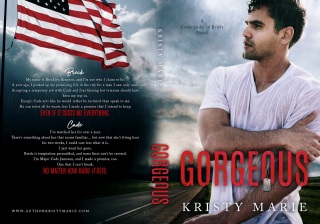 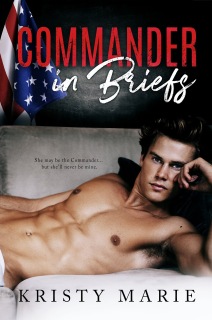 After eight long years, she released her debut novel, Commander in Briefs. It was a long road, but she can honestly say, the road less traveled had the most beautiful sights.
The only thing Kristy Marie loves as much as reading and writing is sports! Especially those that require muscles and a nice ass. Her favorite is, and always will be, baseball. She’s such a fan, that she even married her small town’s high school’s centerfielder where they still live with their three badass kids.
Commander in Briefs is her first series but definitely not her last.
Website
Facebook Author Page
Twitter
Instagram