It’s an impossible situation, but if anyone can save Flicka, it’s her loyal, hot, ripped, bossy, protective, truly maddening, totally off-limits bodyguard.

Flicka von Hannover was a princess, but not anymore, sort of. To hide from her conniving soon-to-be ex-husband and divorce him as soon as possible, she runs to the place specified by her prenuptial agreement, Las Vegas.

She has left everyone and everything behind except Dieter Schwarz, her bodyguard who saved her that terrible night and smuggled her to Paris and now to Nevada. Living with the six-four, ripped, bossy Swiss mercenary is driving her crazy in more ways than one. Every time he comes near her, she wants to rip his clothes off with her teeth.

Her ex knows that she must be in Las Vegas to establish residency to divorce him, and his men are looking for her. When his Secret Service try to kidnap her and Dieter saves her again, the adrenaline and heat of the moment are too much for them to resist.

But her ex knows that she has to file the paperwork to divorce him, and he’ll do anything to stop her, even mounting an assault with his army on the courthouse when she tries to go to court.

When an actual prince—who has a Secret Service, an army, and real spies—is hunting you down, you run, and you hide IN A FARAWAY LAND.

Bastien the Swiss guy, again. He ordered a Weizenbier, as he alternated those with his top-shelf martinis, and Flicka typed it into her screen.

Just as she was getting ready to wink at him and flounce off to her next ten-second interaction, Bastien glanced over her shoulder. His face stilled, and he didn’t move.

She looked behind herself.

Six men threaded through the crowd toward them. All wore dark suits. All were looking intently in her direction. The closest was on the other side of a blackjack table and rounding it fast.

Her tray crashed to the floor behind her.

People hollered at the spill and noise.

Dieter was at the table ahead of her, and she sprinted toward him.

He looked up and was already sliding off the barstool seat as she got to him. He grabbed her arm as she passed, pushing her ahead of him, and they ran for the kitchen doors at the back as they had planned.

Flicka risked a quick glance back.

All of the black-suited men were chasing them, but they weren’t dodging through the crowd as quickly as she and Dieter were.

They crashed through the swinging door and pounded down a hallway toward a door that led to another back hallway.

When they reached it, Flicka slammed her palms against the crash bar, but it didn’t budge.

She hit it again. Nothing. “It’s locked.” 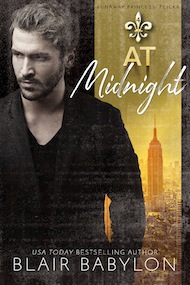 Copy/paste this link into your browser to sign up for email alerts about new releases, special sales, and free ebooks: http://smarturl.it/Babylon-Email . Blair sends out chatty, fun emails with great deals. Hey, she’s a reader, too, and she understands that it’s hard to find great new writers to read and harder to find great freebies and deals.