LOST FOR YOU by Jayne Frost

*Arc generously provided by author in exchange for an honest review*

I was first introduced to Lost for You by its lovely author Jayne Frost through instagram! I had seen a lot of my bookish friends posting about it and decided to give it a shot.

Lost for You is great because it is a standalone as well as part of a series. While reading I liked that I didn’t feel like I would have understood parts if I read the other books in the Sixth Street Bands series, it was perfect because everything was its own.

“You’re the smooth surface to all my jagged edges”

Lost for You starts with Chase Noble, a bar owner, building owner, and owner of many other various things. He’s a business man with great musical talent, however his past drug addiction keeps him on the sidelines watching his little brother Cameron and his band Caged take center stage.  While Chase manages them and waiting for his demons to make their way to the surface. 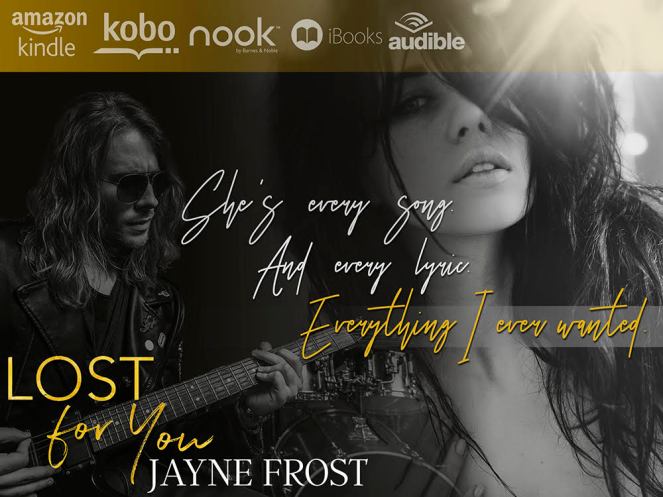 Taryn Ayers has had a lot of loss in her recent years. After the death of 2 of her band mates/ childhood best friends she’s been the manager of the 3 top bands in the country under Twin Souls, the label of her best friend Tori. Taryn is struggling to find her own way, especially when one of the bands she deals with is her ex-love of her life Beckett’s band. Beckett’s constant push and pull makes Taryn basically exhausted romantically and professionally. She has a ton on her plate, but one thing is for sure. She’s the best at her job.

“Our eyes met, and for a moment I felt a connection so deep it took my breath away.”

When Chase and Taryn meet its by chance at Starbucks. Chase want’s her, more than he’s ever wanted any woman before. Taryn feels the connection to Chase and can’t seem to find a good reason not to see him. After a few hot and heavy nights, things start to spin out of control. Chase falls into old habits, and Taryn is sick of being everyone’s doormats. Their relationship is going to face a lot of tests, but will they be able to overcome it all in the end?

Taryn and Chase I felt characteristically were like-able. I wasn’t really attached to either of them though. Chase I felt put himself in some unnecessary situations, and Taryn when she didn’t want Beckett, still strung him along. Also towards the end of the book (epilogue) I felt left some unfinished business between Twin Souls and Metro, you’re kind of left hanging wondering what happened. I cannot say I didn’t enjoy this though, because I certainly did. I COULD NOT PUT IT DOWN. And this is coming from someone who doesn’t usually read rock star romance books. However Jayne Frost did write a wonderful story. I may not have connected to the characters as much as I hoped, but they did have some character development. I’m also CRAZY interested to see if Tori and Logan will have their own book 😉

I’ve been clean for years. But now my addiction has a face. Her face…<bghteen, I stood at the precipice of stardom. I had the record deal. And the tour to back it up. But I succumbed to the pressure of that life. The dark side.<bI skate on the fringe. My brother is the genius guitarist for the band Caged, and I’m the one who helped make that happen. I’m happy to run my bars and my land development company.<bI am.<bthen I meet her—Taryn Ayers—the music manager behind the three biggest bands in the country. She doesn’t know I’m Cam’s older brother. Or that I’ve got a secret that makes<bworld and mine fundamentally incompatible.<blem is, I want to know Taryn. I crave her as much as any drug.<bcan I risk letting her know me?

Lost For You is a STAND ALONE New Adult Romance.<bnded for mature audiences due to hot as sin rockstars and the world they live in.**Please note: This book contains instances of drug use.** Book Excerpt:

At the subtle shift in energy, I pulled Taryn to my side. She kept her head down as I spun us toward the main floor. When we emerged on the other side of the bar, I ushered her through the door marked No Admittance and into the hallway that led to my loft.

“I shouldn’t have come,” she said, her breath uneven. “Do you have a back entrance?”

I rounded on her, and when I caught sight of those eyes, impossibly large as she blinked up at me, I couldn’t help myself.

My mouth crashed into hers, my tongue demanding entry as I maneuvered her against the wall. Her lips parted on a gasp. But then her hands were in my hair, and it was all hot breath and soft moans. And fuck, the taste. Like strawberries fresh from the vine.

“Fuck, you’re sweet.” My palms glided up her sides, inching towards her breasts. “I knew you’d be sweet.”

Her little pants warmed the hollow of my neck. “So are you.”

I stroked her jaw with the pad of my thumb, and even in the dim light, I saw the flush color her cheeks.