When I heard Penelope Ward was releasing a new book called Drunk Dial I was crazy excited. Who reads that blurb and wouldn’t be? It was everything I expected one of her novels to be, snarky and witty. Make me laugh till I either cry or pee my pants, and swoon.

Drunk Dial starts with Rana Saloomi, living in Detroit and working as a very talented belly dancer. After a long night of work and sick of just about everything, she get’s really drunk and looks up the 13-year-old boy she once lived in the garage turned apartment at his house many years ago. She finds Landon Roderick, and rips into him so good (or so she thinks) and then hangs up! Finally releasing all the pent-up emotions and energy she’s had at him after he “seemingly” forgot her existence after her father up and moved her from Landon’s garage.

Clearing my throat, I did my best to sound like a composed woman, one who’d maybe just had a drunken demon exorcised from her. “Hello?”
He let out a deep breath. A moment of silence passed, until he finally said, “Rana Banana?”

But when Landon unexpectedly calls her back and lets her know just how wrong she is about him, they start to reconnect. Nightly phone calls and texts bring Rana and Landon back into each other’s lives and hearts from the moment of that first drunken call. The only problem is both of them have a huge secret that could forever alter their relationship. They try to take their time slow together to reconnect and learn how they are now, rather than how they were before. Falling in the process. 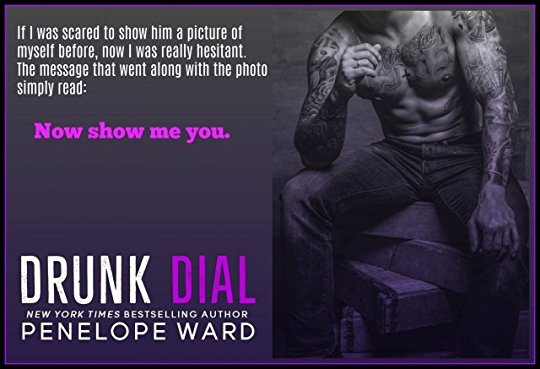 I couldn’t wait for Rana and Landon’s calls to each other to see what they were doing or thinking, or how it would progress next. Landon was so swoon worthy, and an overall really good guy. He was an alpha who wasn’t shy about how much sex he had, but wasn’t typically where he was only looking for just sex. He knew he wanted to connect deeper with someone. His virtual date he had prepared for Rana was the seriously the most romantic thing ive read in a long distance relationship story. Rana on the other hand, I could’nt really get what Landon saw in her. Towards the end I had slightly more attachment to her/ appreciated her character more. However in the beginning she just comes off overly jealous, getting hung up on things in Landon’s past that he can’t change, or weren’t his fault. As well as whiney and insecure. She did redeem herself here and there, but she wasn’t one of my favorite heroines.

“We were both silent until he said, “Don’t stop talking to me, Rana.”

This book for my was really cute and charming the moment I started it. However the pace got slightly boring once things fully progressed. There’s another major part to the story that I though was great to the plot. But then other parts with “Lenny” I felt weren’t necessary. Once Landon and Rana meet and decide to really be together it almost lost its spark. The romance felt like it was drying up, or being forced because we were getting closer to the end. I really still wanted to finish the book, don’t get me wrong (I read it in 1 day) I just wish things hadn’t progressed so quickly because we ended up with almost like a “now what” scenario. They didn’t have any drama between them to sort through, no more secrets etc. It felt like it should have ended there, but I still liked the way it ended, especially in the Epilogue. Overall it was a very good read, just had a few bits that I wasn’t all that into. But I still recommend!!

It seemed like a good idea at the time. Look up Landon Roderick, that boy from childhood whom I’d never been able to forget—even though he so easily forgot about me—and call him.

Then again, anything sounds like a good idea when you’ve had a little too much wine before bed, right? It was supposed to be just a quick, meaningless, prank call. Instead, I went off on him—unloading thirteen years of pent-up emotions.

I didn’t think he’d call me back.

I certainly could never have anticipated the weeks of sexually tense phone conversations that followed as I got to know the man he’d become.

Turned out, Landon had never really forgotten me, either. That special connection we had was still there. I opened up to him, but there were also things about me he didn’t know. And he had his own secrets.

Over the countless hours we talked on the phone, I wondered what would happen if we actually saw each other. One night, I did something impulsive again. Only this time, I went to the airport and booked a ticket to California. We were about to find out if one phone call could bring two lost souls together or if my drunk dial really was all just a big mistake.