BRIAR
I was infatuated with Asher Kelley the moment he came tumbling through my brother’s window five years ago.
Even bruised and bloodied, he was the most beautiful boy I’d ever seen.
We couldn’t ever be together.
I was too young, and he was too untouchable.
He was too troubled, and I was too naïve.
But the heart is rebellious, and mine decided it didn’t care about any of those things.
As I got older, harmless flirting turned to stolen moments in dark corners.
Until one day, he was gone without a trace.
Now, two years later, he’s back.
Callous and cruel.
He’s my brother’s best friend. My parents’ worst nightmare.
I should hate him.
But like a Bad Habit, I can’t quit him.
ASHER
I was drawn to Briar Vale from the first time she looked up at me with stars in her big, blue eyes.
She was just a kid, nothing but elbows and knees, but she was the most beautiful creature I’d ever seen.
We could never be together.
I was too old and she was too off limits.
She was too good and I was too fucked up.
Eventually, the temptation became too much to resist.
I risked everything for a kiss and she betrayed me.
Two years have passed and I’m forced to see her again, but now she’s all grown up.
She’s my best friend’s baby sister. My downfall.
I hate her for what she did.
But she’s always been my drug of choice.

The quiet snick of the front door closing alerts me to her arrival. About fucking time. I flatten myself against the wall behind her door right before she opens it then gently nudges it shut with the back of her foot. She kicks off her shoes and starts to pull her dress up to take it off. Standing with her back to me in front of the moonlit window, I can make out her brand-new curves. Her tight, round ass. The dimples on the small of her back. Her dress is just past her hips when I speak.
“Have fun tonight?”
Briar yelps and drops her dress back in place before spinning around.
“I was until I had some perv spy on me for the second time in as many days.”
“Oh, I’m the pervert?” I taunt, moving closer. She wants to back away, but she doesn’t. She stands her ground, and it only spurs me on. “Correct me if I’m wrong, but I believe it was you who watched me jack off this morning.”
I’m almost sad the lights aren’t on to see her inevitable blush. I’m standing over her tiny form, and she has to crane her neck to look up at me.
“Momentary lapse in sanity.” She shrugs. “It’s nothing I haven’t seen before.”
Those words kick around in my head for a second before I practically tackle her onto her bed. She lands on her back, mouth parted in shock, with her legs spread and her dress ridden up. My hips fill the spot between her thighs, and I pin her hands to the bed.
Fuck, this was a bad idea. She smells good—sweet, like her conditioner—and she feels even better. I have to fight the urge to grind into her.
“Nothing you haven’t seen before, huh?”
“No,” she says between clenched teeth.
“Who was it?” I demand. “Was it the little golden boy from tonight?”
“None of your business.”
“Tell me, Briar,” I whisper, getting closer to her ear. “Did he make you come from a kiss like I did? Does he know what you sound like as you do? Because I can still hear you. I can still see you.”
If her sharp intake of breath didn’t let me know she was affected, the way she rocked into my jean-covered cock does. I stay stock-still, still braced above her with my hands around her wrists.
“Does he know that I was the first one to make this little body come before you even knew how to do it yourself?” I bring her wrists closer together so I can grip them both with one hand, and I trail my index finger from her sternum all the way down to her underwear.
A moan slips free, and her hips chase the friction once more.
“No,” she whispers. 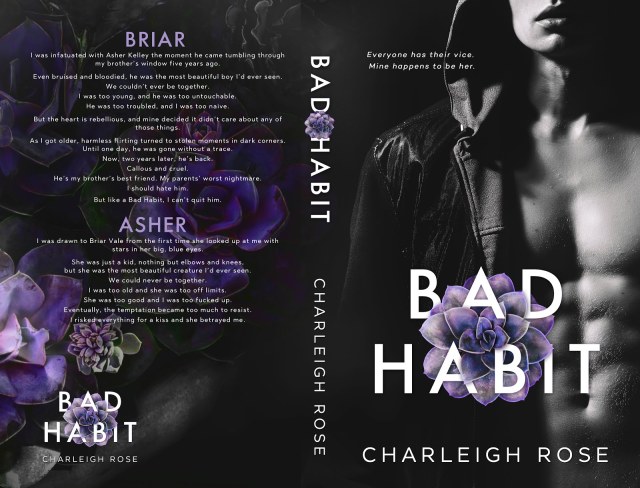