Bad For You by J. Daniels

*arc kindly provided in exchange for an honest review* 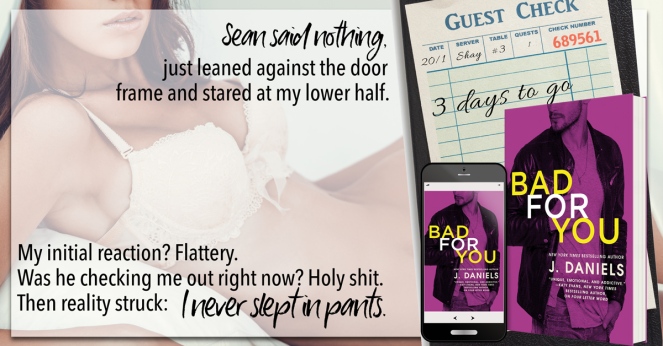 Bad for You starts with Sean “Stitch” Molina and Shayla “Shay” Perkins. They both work at the restaurant Whitecaps. Being a waitress and starting her own salon on the side, Shayla has a lot going on in her world right now. Both good and bad. But she never wavers until after an emotional breakdown, Stitch breaks his silent streak and comforts her. From there on out Shayla isn’t letting him pull out of this friendship so easily. Stitch doesn’t know how to react around Shay. He’s so drawn to her but tried not to let it build, but with Shay’s stubbornness he’s got no choice but to let it ride. Their ride is a slow burn, and emotional story. There’s so much to it that I don’t want to give anything away, but it was one hell of a magical ride!

“I feel like this has been building forever, and when something builds up that much, there is no easy release. It’s chaos.”

So for the character We all saw bits and pieces of Shay and Sean’s interaction through the other books in the Dirty Deeds series, but now we see it so much more in-depth, and it was soooo much more than I expected. I knew Sean was going to suck me in with the “quiet, bad boy flare” but I didn’t realize at first just how DEEP his character was. He is so complex, his past experience have made him the silent type. He wants for nothing, and has a ton of insecurities, but he is really amazing. His character buildup was better page after page I couldn’t get enough of him, and I really wanted to jump through those pages and give him the worlds biggest hug.

“I wasn’t nothing to her, and I did not fucking understand that, but fighting her, fighting this…I couldn’t do it.”

Shay on the other hand is opposite. She is a sweetheart who will also cut you if you she has too. Her bright and bubbly personality draws Stitch to her. Neither of them can explain the draw to each other. She takes Stitch on as a friend without letting him work his way out of it. She becomes super protective over him and after you read it you’ll understand why. I loved both of these characters and the journey they took me through. I only wish I could have more of them.

“You deserve love and kindness because you put out those things, Sean. You deserve to feel wanted. I want you. I want you so much. Let yourself feel that…”

Bad For You was so Good for my Soul. It’s an emotional read that kept pulling at my heart-strings all the way through. For the first time in a while, I felt such a deep connection to this book and Stitch and Shay’s story. It broke my heart, made me cry and then it mended it and made me laugh over and over again. It was an unexpected tear jerker, but a wonderful one. Bad For You will remain one of my top reads for 2018.

“If you’re a fan of Kristen Ashley, then you will love this book.” -Aestas Book Blog on Four Letter Word

He didn’t want to be bad. He just didn’t have a choice…

Shayla Perkins isn’t the kind of girl who makes the same mistake twice, especially when it comes to Sean “Stitch” Molina. So when he gives her the world’s biggest rejection, that’s it–she’s done. Until the sexy, silent, unavailable Sean makes Shay a very personal offer. Of course, it still doesn’t mean he’s interested in her. Or does it?

Sean has done things in life. Bad things. And he’s paid the price. All he wants now is to make up for his past by doing good in the present. And no one deserves more good than Shay. Beautiful on the inside and out, Shay is the kind of woman who should be cared for and protected–especially from a man like Sean. He’s tried to keep his feelings for her in check, but a single, reckless impulse pulls them closer than ever before.

Soon the two are sharing their biggest dreams and satisfying their deepest desires. But what will happen if the only way to truly give each other what they want most…is to let each other go?

J.Daniels is the New York Times and USA Today bestselling author of the Sweet Addiction series, the Alabama Summer series, and the Dirty Deeds series.

She would rather bake than cook, she listens to music entirely too loud, and loves writing stories her children will never read. Her husband and children are her greatest loves, with cupcakes coming in at a close second.

J grew up in Baltimore and resides in Maryland with her family.

Sign up to receive her newsletter and get special offers and exclusive release info: http://authorjdaniels.com/newsletter/